Unaccaptable discomfort glare and evaluation of the UGR

Unaccaptable discomfort glare and evaluation of the UGR

Unpleasant glare (dazzle) is one of the parameters that directly affects user comfort in lighting. It introduces discomfort and irritation. 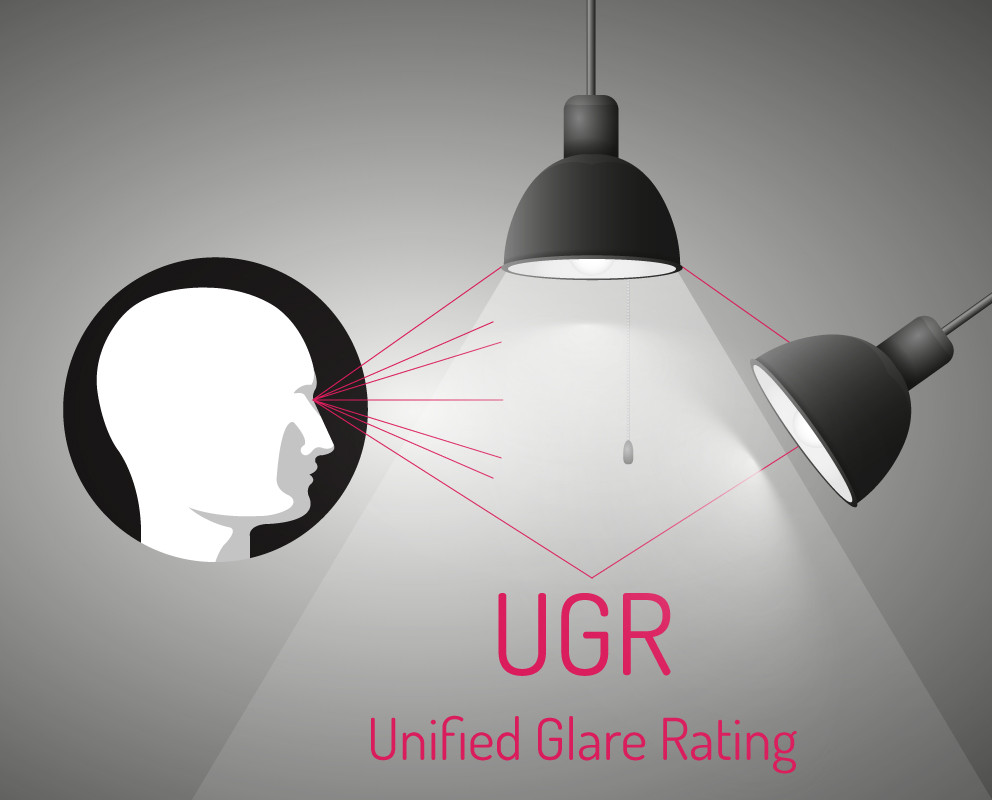 A distinction can be made between direct and indirect glare (dazzle). Direct glare results from the light rays falling directly from the luminaire into to the human eye, while indirect (reflective) glare results from the light reflected from various objects (white walls, furniture, etc.). Direct glare is the main cause of discomfort, which will cause dazzling at luminance values above 700cd/m2. The lighting should be selected and installed in relation to the workstation in such a way as to eliminate the discomfort caused by glare.

Unpleasant glare is a parameter that is not assessed accurately at the workstation. It is not possible to measure it with a single measuring device. The UGR parameter should be taken into account at the lighting design stage.

The measure of glare is an assessment of UGR glare, which determines the requirements for rooms included in PN-EN 12464-1 standard. The standard defines the degrees of UGR value as a sequence of values whose degrees indicate noticeable changes in glare.

The glare assessment can be determined by a tabular method developed by the CIE based on an example calculation which takes into account the observer standing against the wall looking longitudinally and transversely to the axis of the luminaires in the room. The method is based on a basic equation:

This means:
Lb - Background luminance in cd/m², calculated from Eind/π with Eind as vertical indirect illumination at the observer's eye.

L - average luminance in cd / m2 of the light-emitting surface of each light in the direction of the observer's eye.

ω - Solid angle in steradian (sr) of the light-emitting surface of each light relative to the observer's eye.

p - Postionsindex by Guth for each lamp, depending on their spatial deviation from the main line of sight.

Indicator p - binds the mutual position of light sources, the light environment and the observer. Since this indicator is not given in the literature or in the standards in a way that allows its practical application - an engineering attempt has been made to develop a method of its determination for both measurement and design purposes. The concept of visual impairment is understood as the sensation caused by the light acting on the observer characterised by the intensity of light coming directly from the light source and the environment, but also by the position of the light sources and the position of the observer. Based on these assumptions, the position indicator is therefore determined in lm/m2 that is lx.

In addition, the distance between luminaires is S = 0.25m*H 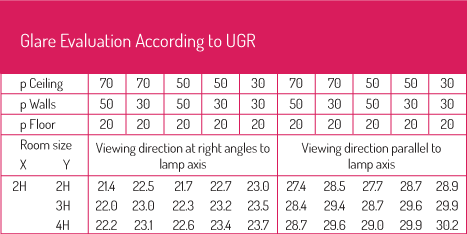 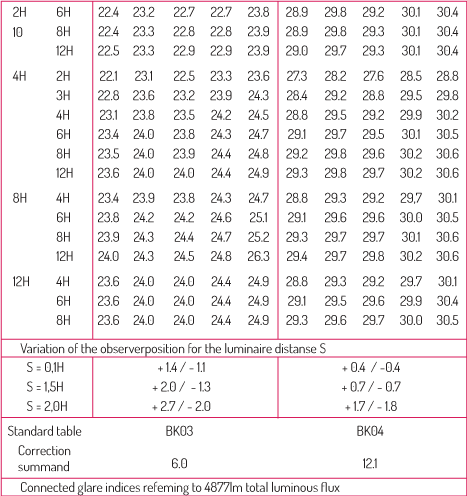 p : mounting distance of luminaires from the ceiling

H The calculated values are marked in red

To determine the position of the x and y coordinates with respect to the observer, the room and the axes of the luminaires it will be helpful to consult the supporting drawings.

Note that the observer always looks in the y direction. If the observer changes direction, his or her coordinates also change. In our case we have a UGR value of 28.4 for the parallel axis and 22.8 for the transverse axis.

Thus, the tabular method is helpful to determine the glare assessment under certain conditions. Unfortunately, under real conditions, these values can change significantly due to the way the luminaires are installed and the location of the workstation. The best solution is therefore to design lighting with already designated workstations, which will allow you to adapt the lighting to specific conditions in reality.