How to effectively plan outdoor lighting?

How to effectively plan outdoor lighting?

Proper design of facades and outdoor spaces lighting plays an important role in social functioning, and the aesthetics of buildings, as well as it allows for safe movement between buildings or in parking lots. When designing the building facades or car parks lighting, we may encounter problems related to intrusive light, skylight and glare.

Intrusive light, also called unwanted light, is the light that illuminates buildings and places that were not included in the design. An example of intrusive lighting will be the lighting of a pedestrian walkway, which additionally illuminates a private property.

Sky lighting, also known as glow, is the result of the dispersion of light in the atmosphere. Such an effect is obtained by incorrect selection of lighting fixtures, their wrong orientation or reflections of light from the surface.

Glareis the most undesirable and frustrating phenomenon, which additionally affects the safety of users. Unprotected light sources with high luminosity are the main cause of dazzle. When the eye of the observer has been adapted to the level of luminance in a given environment, light sources of much higher intensity, e.g. light advertisements, will cause undesired glare effect. This phenomenon may lead to the observer's visual impairment.

We must also remember that when designing lighting in a car park or industrial area, the requirements in accordance with PN-EN 12464-2 should be met.

The key factor that is worth taking into account is the saving of electricity. The use of LED line® sources and automation to start up the lighting only under strictly defined conditions will ensure appropriate savings.

When selecting the light to illuminate building facades, we should also take into account their resistance to weather conditions, beam angle, but also the colour temperature CCT(K) or appropriate colour. Buildings can be illuminated from the bottom, top and front of the facade. Through the combination of these methods, we can achieve a very effective highlighting of the architecture of the building. 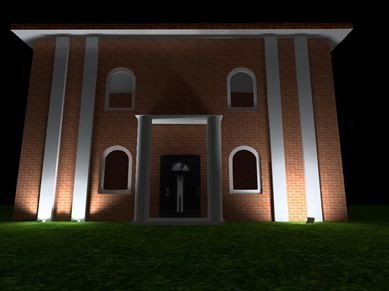 On the left side there are two sources of lighting from below, while on the right side there is one illuminator set at a distance of 90 cm from the wall and directed at a suitable angle to the building's facade. As we can see, we received two completely different visual final effects.

With one skylight we save electricity, we do not illuminate the sky, but we certainly achieved an intrusive phenomenon. However, in the example on the left, we obtained a much more interesting visual effect, but the energy costs are higher and the sky is strongly illuminated, while intrusive lighting is reduced to its absolute maximum.

Which way to choose?

In the case presented in the above visualization, it will be much better to use the system of floodlights shown on the left, but it is recommended to replace the power with LED line® PHOTON 10W floodlights.

Thanks to this, we will save electricity and when the light output is reduced, we will get rid of such strong skylight illumination, while the visual effect will be definitely better.

However, we have to remember our own preferences and design the illumination of the facade in such a way as to minimize unwanted light effects, but also to achieve a visual effect in accordance with our taste.

On visualization 2 we presented an example of lighting both the facade and parts of the area. On this example, we have mounted the LED line® PHOTON 30W floodlight, whose location and angle of inclination provides light both on the building's facade and in the adjacent area.

If we need to illuminate both the area on our property but at the same time achieve a decorative effect, let us choose this way of lighting.

Another interesting solution is to light the building from the roof soffit with low-power light sources and narrow light distribution. Thanks to such a solution, we will achieve an effect in which the light is used entirely to illuminate the façade. For example, in visualization 3, we have used LED line® GU10 3W 36° LED sources, which should be mounted in LED line® waterproof downlight fixtures, dedicated for this type of sources and with increased water tightness. 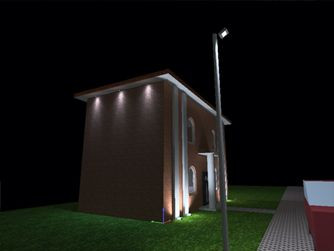 If we find that the lighting of the building's facade does not sufficiently illuminate the area in front of the property, we can additionally mount a floodlight on a pole. In this case, the light must be carefully directed in the right direction.

When setting up the lamp, one should remember about undesirable phenomena, i.e. intrusive light, glare and skylight.

In addition, if the part of the area you want to illuminate is not designed to carry out certain types of work/activity, but only to illuminate the path or driveway, you should definitely use lighting lamps with a relatively low light output.

On the visualization 4 there is a 30W LED line® PHOTON floodlight mounted at a height of 5m. Thanks to this solution we can achieve the effect we have planned. 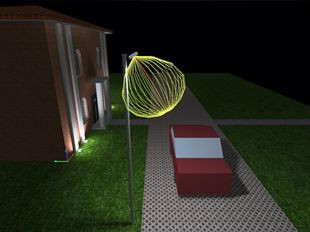 To summarise this article, one should always take into account one's own visual preferences, but also the needs of the whole area. Following the right advice, you will be able to make the lighting of the property with very good parameters, both in terms of lighting and aesthetics. It should be remembered that not always lamps with very high power will meet our expectations. Often the use of floodlights up to 30W will be sufficient, and adding to that the twilight and motion sensor will give full satisfaction.

Visualisation no. 5 shows the distribution of light with the above-mentioned lamps.