What is a flicker? Can we see it?
Flicker is most often described as visual instability caused by a light incentive whose luminance or spectral distribution changes over time for a static observer in a static environment.

What does the flicker effect depend on?

The phenomenon of flickering depends primarily on power supply systems, the quality of voltage and current in electrical networks and the ways of controlling light sources. However, it should be remembered that the problem concerns all light sources located in public spaces, whether it is traditional lighting or lighting based on modern LED technology.  All of them can have an adverse effect on human health and well-being.  As long as the process of manufacturing is concerned, in products, especially low-cost ones, the manufacturer must choose between the lack of flicker effect at the expense of deterioration of other electrical parameters - such as Power Factor.

Has does flicker affect our health and well-being?

The health effects of flickering can be divided into immediate, which are the result of a few seconds' exposure to light, and those that may occur under the influence of long-term exposure.

Visible health effects, such as epileptic seizures, occur most often in the flicker range of 3 to 70 Hz. It has also been found that people with diagnosed photosensitive epilepsy are most likely to have seizure in the 15-20 Hz range. On the other hand, long exposure to light at frequencies higher than 70 Hz, even though the person cannot consciously perceive the flicker, can cause ill health, impair vision and cause headaches.

Electrical circuits, as long as fluorescent lamps are concerned, are featured by a flicker which is twice as high as the power frequency. It has also been found that with a properly functioning system with electromagnetic ballasts they should not cause epileptic seizures for people exposed to them. It should be stressed,

however, that for persons who are sensitive to light, although fluorescent lamps work properly, undesired side effects may occur. In addition, over time fluorescent lamp systems may be featured, in addition to the deterioration of the quality of the light emitted, by a decrease in flicker frequency. A very important aspect in addition to the flicker frequency is also the size of the modulation and the shape of the waveform, which have an important influence on the perception of the flicker by the observer.

Is LED light free from flicker?

With the arrival of systems based on LED light sources, flicker has not ceased to exist. In addition, thanks to the easy control of the LED’s light output, the risks associated with this type of modulation have become apparent.

Some of the control systems in LED lights are stable and others are featured by high flicker ratios.

The developed parameters and methods of flicker measurements identify this phenomenon.

Flicker Percent -  is featured by a relative measure of cyclic variation of light amplitude.
Flicker Index- this includes the percentage of flicker, the shape of the course and the cycle, which refers to the percentage of time in a single cycle. 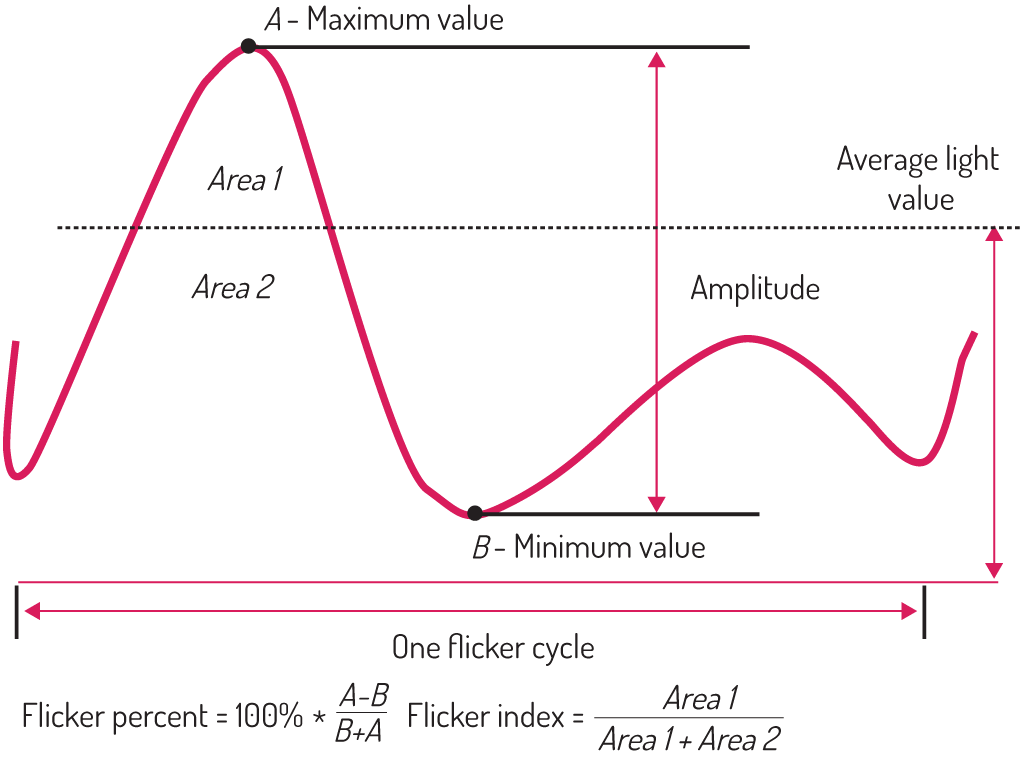 It also follows that a flicker frequency above 3000 Hz ensures that this restrictive condition is met, regardless of the Fp level.

The observer safe level in relation to the Flicker Index is when this factor is between < 0 - 0.1 >.

What is the stroboscopic effect?

In addition to the flicker effect, an SVM parameter was developed to describe the stroboscopic effect. SVM takes into account the changes in wave frequency and uses Fourier analysis to analyse the light intensity waveform. The stroboscopic effect can give the impression of slowing down, stopping or even reversing the direction of a cyclical object, which can lead to accidents involving people. It is now believed that the SVM £ 0.4 is a value that reduces the possibility of noticing a stroboscopic effect to a minimum.

Are there any tests to check the lighting for flicker effect?

At the LED Line® Light Research and Measurement Centre we have checked how fluorescent luminaires operate and what flicker they have.

The tests were carried out on a 60/60 raster luminaire, which is often used in offices as well as production spaces and passageways. In addition, we tested T8 LED tubes, which are very willingly used as a better substitute for traditional fluorescent lamps. The research proved that the LED source used in a traditional raster luminaire, apart from lower power consumption, does not give us the parameters we would expect.

In the table we present the measurement results of 4 fluorescent lamps mounted in a traditional 60/60 raster luminaire. 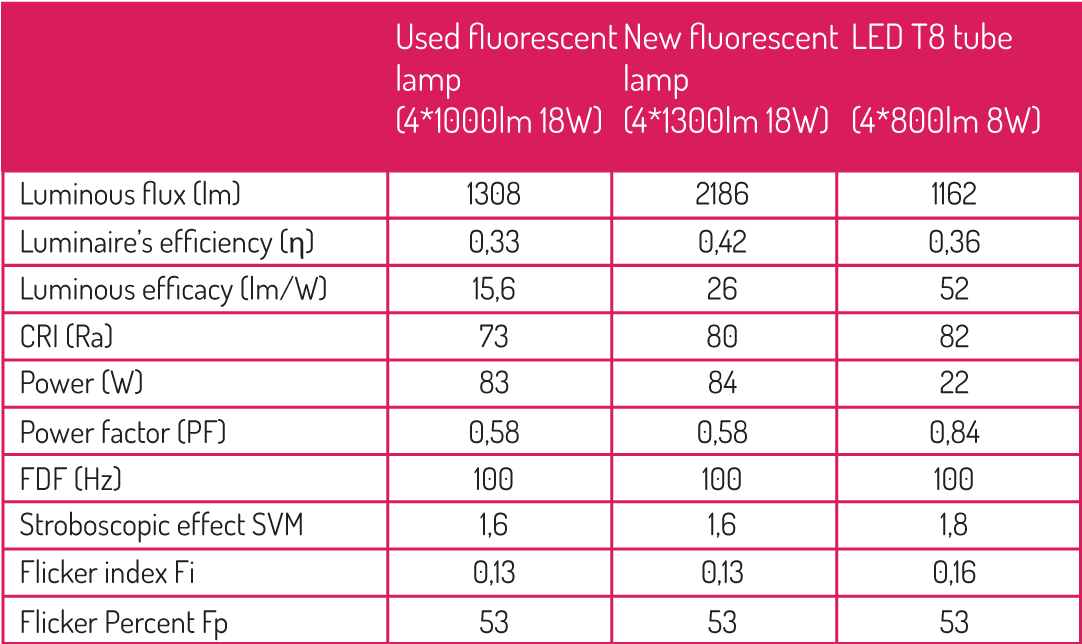 As we can see in the table, the results of the parameters determining the flicker significantly exceed the recommended values.

Flicker percent, which should be £ 0.0333* f [Hz] = 3.3 is significantly higher. Also the SVM parameter significantly exceeds the recommended value of 0.4.

Due to such poor parameters, the manufacturer of LED line® luminaires has decided to present a modern replacement for a traditional raster luminaire.

What solutions do lighting manufacturers suggest?

New generation of light based on LED technology is featured by a very similar light distribution angle. The use of a power supply, where you can choose the power of the luminaire according to your needs, makes it extremely easy to replace luminaires in existing installations designed for fluorescent lamps. Replacement of luminaires in ratio 1 to 1 without the need to modify the electrical installation significantly increases the functionality of the new DIORA panel.

Therefore, by replacing traditional fluorescent lamps with new DIORA panels based on LED technology, we can adjust the amount of light without any complicated dimming systems and loss of efficiency of LED line® DIORA panel. Taking care of the health and well-being of people surrounded by light, we decided to take care of the aspects related to flickering.

Before launching the product on the market we conducted a number of tests and measurements. Thanks to the use of advanced control systems and high quality LEDs we have also achieved very high light and electrical parameters.

Referring to the flickering of light we present the results of the LED line® DIORA panel comparing it with a raster luminaire containing fluorescent lamps. 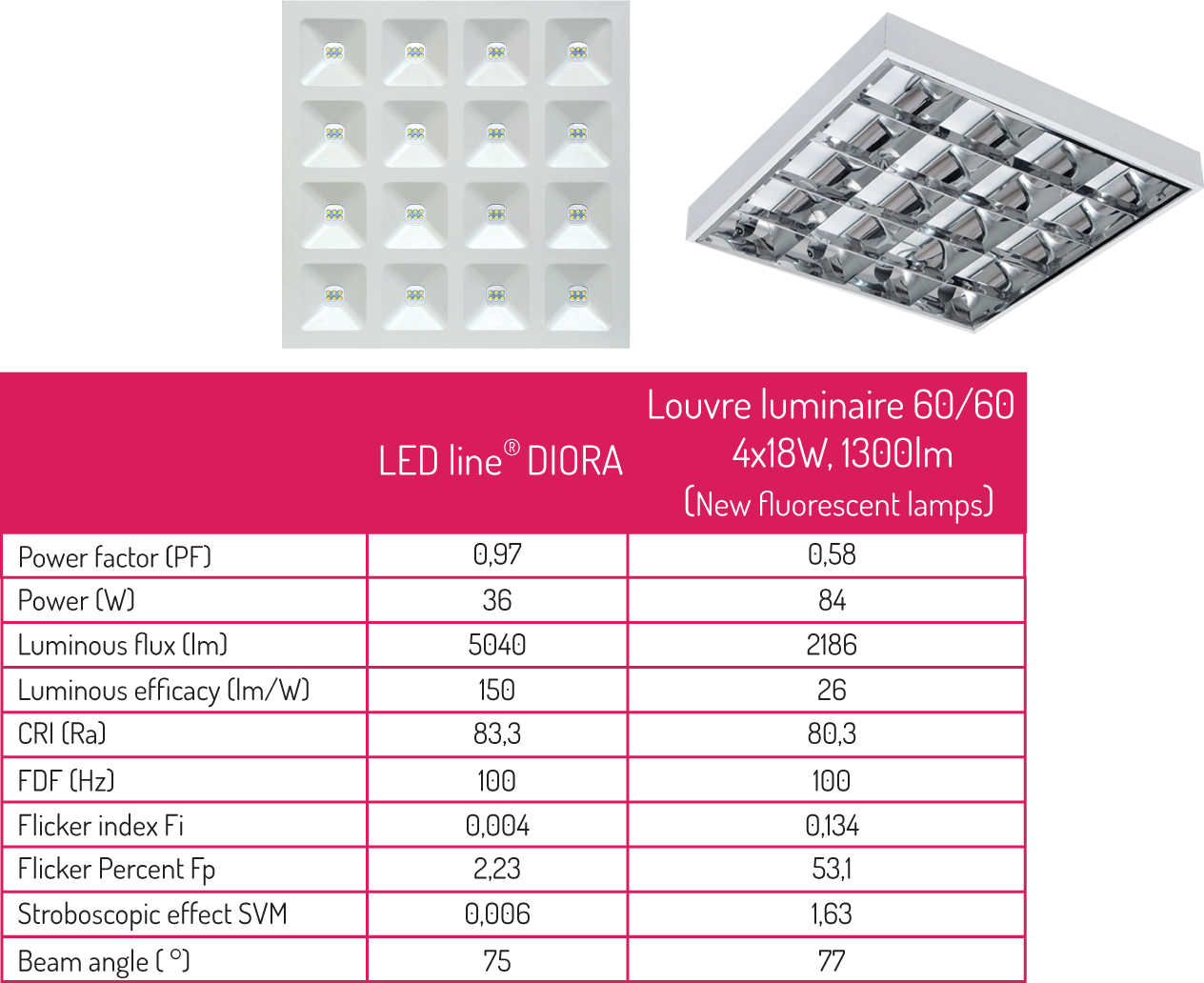 It should be remembered that not all luminaires available on the market guarantee such high parameters related to the flicker effect. Therefore, you should choose luminaires featured by light that ensures concentration and efficiency of employees, which significantly translates into efficiency, but also into the well-being of the whole team.

Head of Research and Development  LEDline®